Great British Railways (GBR) is a new public entity that has been created to oversee rail transportation across the entire country. Among other things, this national body will be responsible for setting train fares, coordinating timetables, contracting passenger services, and collecting revenue.

As part of the government’s commitment to levelling up the rest of the UK, it has decided that GBR’s headquarters must be based somewhere outside of London. To decide upon the ideal location for this, a competitive bidding process was opened earlier in 2022, allowing UK towns and cities to campaign for why they should be chosen.

By the time submissions closed, a total of 42 expressions of interest were made. This has since been whittled down to just six possible candidates, with Doncaster being one of them. The other finalists in the running are Derby, Birmingham, Crewe, Newcastle-Upon-Tyne and York.

Why Doncaster Should Be Made GBR HQ

Being chosen as the home for GBR would have a range of economic and reputational benefits for Doncaster. It would create a number of skilled jobs in the region, drive further inward investment, increase the footfall in our city centre, and ultimately demonstrate that we are a place with great ambition.

We believe that Doncaster has a really good chance of winning its bid, as we meet all of the criteria laid out by the government. Situated on the East Coast Mainline and less than 90 minutes away from London, we are very well connected to the rest of the country.

We also have a longstanding history with trains - having built iconic locomotives like The Flying Scotsman and The Mallard – we have strong connections with major industry players to this day (like Hird Rail and Unipart), and we are training the next generation of engineers via specialist education providers like NCATI and Doncaster UTC.

Finally, Doncaster is a place that has really come a long way in the past few years, as evidenced by the fact that we were recently granted City Status. We have good quality housing, a thriving education system, and a fantastic leisure sector that boasts national attractions in the form of Doncaster Racecourse and the Yorkshire Wildlife Park. With that said, we have a lot to offer Great British Railways workers should they need to relocate here in the future.

How You Can Support the Bid

Now that Doncaster has made the cut for the GBR HQ shortlist, we need to do everything in our power to make ourselves stand out from the competition.

One of the things that the government will be considering is the amount of public support for the bid. On that note, residents can lend their voice to the campaign by generally raising awareness, writing to their MPs, using the hashtag #DestionationGBR on social media and, most importantly, voting for Doncaster in the new public ballot. Even the smallest of contributions here will make a big difference in getting our bid over the line.

To help you support the bid, Doncaster Chamber has also produced a comprehensive toolkit, with template letters, social media resources and guidance on how to lobby.

Coming Up in Doncaster's Future 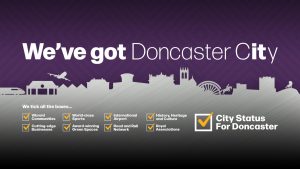 After a determined campaign earlier in the year, Doncaster has officially been granted city status.

With both Doncaster and Sheffield, the South Yorkshire region is now home to two cities, which means that we will have an even bigger seat at the table when it comes to engaging national government. With this enhanced platform, we will be in a better position than ever before to drive the levelling up agenda in South Yorkshire, to hold policy-makers to account and to fight for the interests of our business communities. 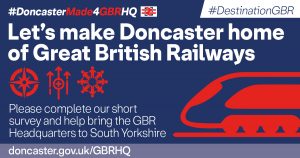 Doncaster is now one of six potential destinations for #DestinationGBR. Bidding to be the home of the of the headquarters of Great British Railways. Given its rail heritage, its central point on the network, its rail industry skills base and the contribution this would bring to levelling up the area, Doncaster has a strong case and having the HQ would further cement South Yorkshire as a major rail industry cluster.

This will attract greater investment with benefits through its supply chain to a much wider area.

To get involved and cast your vote for Doncaster, click here. 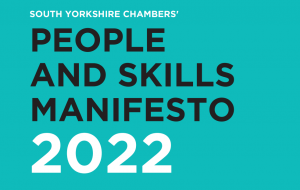 Improving workplace skills is the single biggest challenge facing South Yorkshire’s economy and residents. For this reason it deserves its own manifesto – a statement of ambition for our region and what it will take to achieve it.
Skills drive productivity and ultimately wages. The average output of workers in South Yorkshire is around 20% lower than for the UK – a gap that hasn’t narrowed in nearly 20 years. 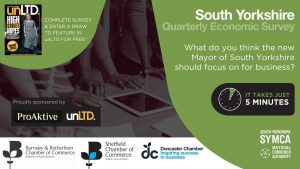 The Quarterly Economic Survery is the largest and most representative independent business survey of its kind in the UK, closely watched by policymakers such as the Treasury, the Bank of England, the Office of Budget Responsibility, the EU Commission and the IMF. With that being said, it is crucial that South Yorkshire businesses complete this important survey.

While the main reason for taking part is to make your voice heard, there is a bonus incentive this time around. Upon submitting the survey, respondents will automatically be entered into a draw, with the prize being a half page advert in UnLTD magazine. 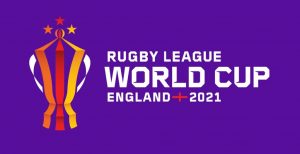 The Eco-Power Stadium will host three men's group games and Doncaster will be the team base for Samoa (Men’s).

A new city requires a new hospital to reflect its status and lofty ambitions. Doncaster Royal Infirmary (DRI) has been caring for the local population for well over 100 years, but the facility is now showing its age. The maintenance backlog is significant at this point, and requires a significant capital investment each year just to ensure that it remains safe.

For this reason, Team Doncaster partners (including Doncaster and Bassetlaw Teaching Hospitals NHS Trust, the Council and various other stakeholders) have been campaigning for a new, state-of-the-art hospital campus to be built.

Potential sites have already been explored, plans have been drawn up and the government has been lobbied extensively. However, we have still yet to receive any funding.

As part of the vision for Doncaster’s future, it is important that we continue to make a compelling case for why a new hospital is needed. One of the ways you can help in this regard is by voicing your support on social media to raise awareness.

Having a train station based at Doncaster Sheffield Airport, like they already do at Gatwick, Manchester and Southampton, would not only be a great asset for our city, but also for the rest of the north of England. It would improve our transport infrastructure, our national connectivity and bring more business to the airport itself.

Plans have already been drawn up for by Team Doncaster partners and, as a Chamber of Commerce, we will continue to support the bid for this train station to be constructed. Keep an eye on our website, future events, newsletter and other communication channels to find out more about how you can get involved.